Message to Our Customers

We understand that the response to COVID-19 is making it difficult for laboratories to deliver core services. If you are unable to process RCPAQAP samples by the due date please log a request via the myQAP portal and where possible we will note this on the report.

If we can be of any further assistance during this difficult time, please do not hesitate to contact us at customer.service@rcpaqap.com.au 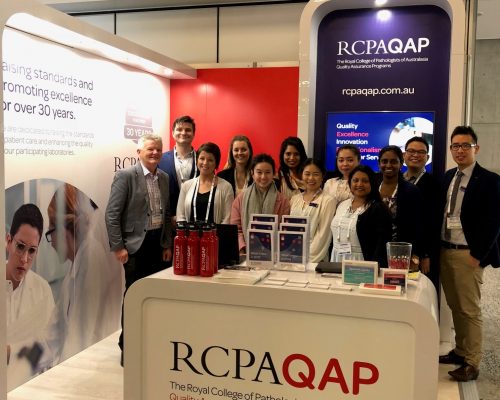 The RCPAQAP had a high profile at the Australasian Association of Clinical Biochemists(AACB) Annual Scientific Meeting, held in Sydney at the International Convention Centre from September 3-5th. This year, the conference was a combined event with the Australian Institute of Medical Scientists which added a multi-disciplinary component to the program. Over fifteen QAP staff attended the meeting and actively interacted with industry and participants alike.

The theme of the three-day conference was “Diagnosis to Cure” featuring many international guest speakers. Particular highlights included Dr Tze Ping Loh’s compelling QAP Plenary on “harnessing laboratory data for better-informed practice”, where he eloquently described the emergence of data science in laboratory medicine and the critical role informatics will play in delivering better healthcare to patients in the near future.  Professor Andy Hoofnagle enlightened delegates with a presentation on mass spectrometry for Vitamin D, emphasising the numerous interferences that can impact on current methodologies (particularly immunoassay), reinforcing the importance of external quality assurance to our profession.

RCPAQAP featured prominently at the poster display session, with the scientific staff (and affiliates) presenting a total of 8 posters from four disciplines:

1. Review of Factor XIII Screen Versus Assay: Results from the RCPAQAP

7. The Effects of Lyophilisation on General Serum Chemistry EQA Material for Routine Measurands 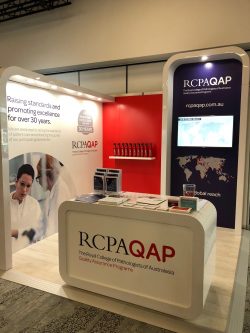